← back to the articles index 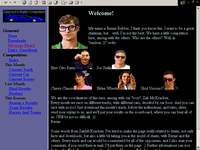 It began in March, 2001... Sleek design, I just wanted to do a competition, not a site for a beauty contest. So that`s because no graphical design, text-menu, but lots of interesting containment. :) 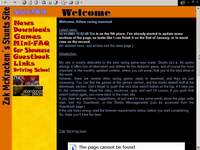 In the summer of 2001 visitor number was very low, I even left one month out. Then in August I refreshed the site, new design, new stuff, and some months later I put up some games, and registered to abandonware lists. Visitor number jumped, and the site began to evolve. More competitors - bigger copmmunity - more stuff. A switchable menu on the left side (general/competition), slow big little bit incompatible design, and not everyone liked it, but I did.

There was a second version of this design where the top banner functioned as a menu too, because I had not enough space to put up menu items, and the game number jumped up a lot. 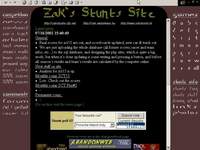 I was so busy developing the site, that the second design stayed for a long time, with some bugfixes, modifications, but there was a point I couldn`t do it more, so a new desing came, developed in 2 days, not such a big work, easy, but slight, compatible, and had good handling because the two menus. 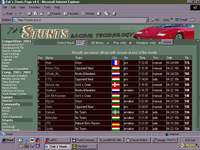 Big change. With some help 90% of the site is now PHP based, so updating is a kid's work from now. (OK, the admin interface is a bit messy now, but you`ll never see that hopefully. :)))

Very light design, but I love the always-centered 750pixel width, and the great navigation and speed this design offers. There will be more subversions of this, as the code gets better and better by time, and if I don`t like this design anymore, making a new one is a second over the php bones.

In 2002 the code as well the site itself has improved a lot. More stuff, more code bigger mess :) 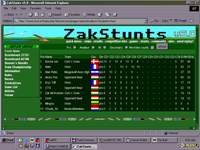 Well after almost a year, new design is up. Left frames, reviewed all the files (still a bit messy) :) but finally archives are just as I wanted them, and the site is easy to improve, and very-very easy to update and maintain.

I almost forgot that since a while the site is physically on my home server next to my clotches in the garderobe. :)

The 5.0 design stayed for more than two years with minor modifications. These minor modification alltogether made the php code really messy and disturbing to improve. So the time came to rewrite it all. As most of the visitors like the design it stayed, with some minor mods which made it even more beautiful :)

We have now a login box, automated replay sending system, a sidebar with fresh news and replays... And an all time high racer and replay number, with no games downloadable on the site. I love ZakStunts the way it is now. 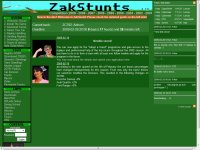 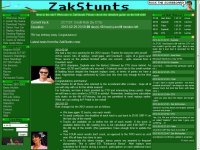 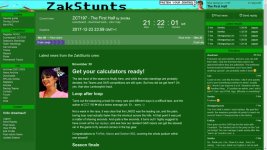 This is when dreadnaut came around and started changing things here and there. He didn't have a plan, he was mostly making lines straight at the beginning, but then started adding details, tables and charts.

The article, news and track archives saw a makeover, and the public replays became downloadable from a list of all race submissions. A new page listing all the teams and their attendance was also added.